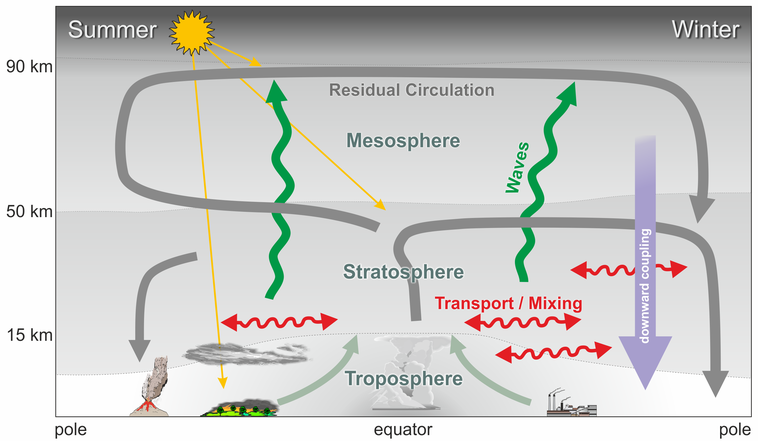 AtmoSat will observe temperatures and trace species in the upper troposphere and entire middle atmosphere, the stratosphere and mesosphere. Trace species released in the troposphere are transported in the middle atmosphere by the residual circulation. In the stratosphere this means upward transport in the tropics and downward transport at high latitudes, in the mesosphere upward transport in summer and downward transport in winter. Together with horizontal mixing and chemistry in the middle atmosphere it determines the chemical composition of the air. AtmoSat facilitates to study these chemical and dynamical processes by the high number of observed species in combination with high spatial resolution. The residual circulation is driven by breaking waves. Changes in this wave driving result in changes of the circulation down to the surface. This could also convey solar variability (e.g. the 11 year solar cycle) down to the surface.

Decadal climate fluctuations are influenced significantly by the variability of the composition and dynamics of the middle atmosphere. At the moment, there is no national or international data base with sufficient spatial and temporal resolution to quantify the underlying physical and chemical processes and to reproduce these adequately in predictive models. According to the proposal, AtmoSat will supply the necessary data basis and will additionally expand time series of important climate variables.

In particular, AtmoSat will facilitate to study the feedback of the atmospheric circulation on anthropogenic climate change and its impact on the regional climate via three scientific targets:

Major scientific messages in the literature:

last change: 2018-06-13 KIT – The Research University in the Helmholtz Association